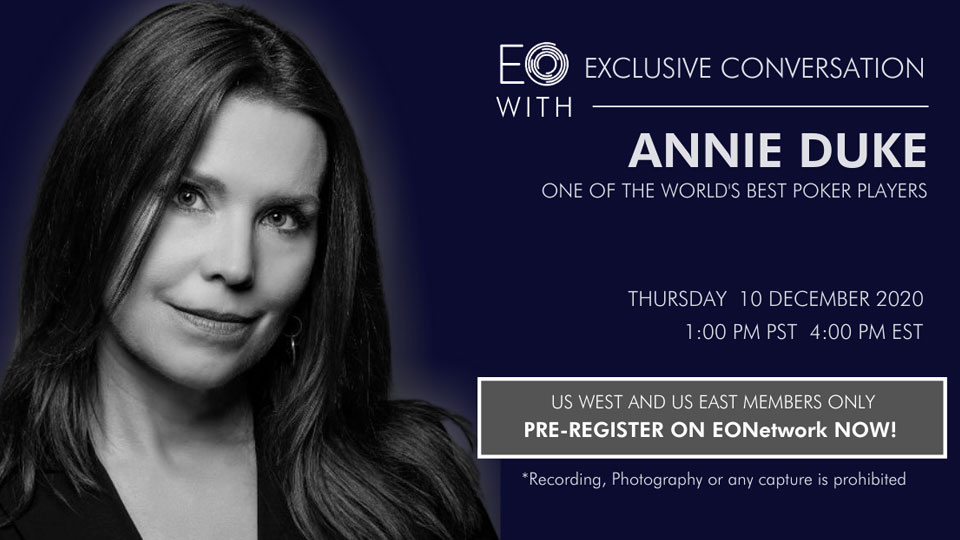 One of the world’s best poker players

Please join us for an EXCLUSIVE conversation with ANNIE DUKE!

Annie Duke has leveraged her expertise in the science of smart decision making to excel at pursuits as varied as championship poker to public speaking. Annie’s latest book out in September 2020, How to Decide: Simple Tools for Making Better Choices, is available from Portfolio, a Penguin Random House imprint and her previous book, Thinking in Bets, is a national bestseller.

For two decades, Annie was one of the top poker players in the world. In 2004, she won her first World Series of Poker (WSOP) bracelet. The same year, she triumphed in the $2 million winner- take-all, invitation-only WSOP Tournament of Champions. In 2010, she won the prestigious NBC National Heads- Up Poker Championship. She retired from the game in 2012.

Annie now spends her time writing, coaching and speaking on a range of topics such as decision fitness, emotional control, productive decision groups and embracing uncertainty. She is a regularly sought-after public speaker, addressing thousands in keynote remarks at conferences for organizations ranging from the Investment Management Consultants Association to the Big Ten Conference. She has been brought in to speak to the executive teams or sales forces of organizations like Marriott, Gaylord Resorts and Ultimate Software, among others. She is a sought-after speaker in the financial sector, with clients such as Susqehanna International Group and CitiBank.

Annie’s passion for making a difference has helped raise millions for charitable causes. In 2006, she founded Ante Up for Africa along with actor Don Cheadle and Norman Epstein, which has raised more than $4 million for Africans in need. She has also served on the board of The Decision Education Foundation. In 2009, she appeared on The Celebrity Apprentice, and raised $730,000 for Refugees International, a charity that advocates for refugees around the world.